Kangaroo Island shipwrecks rank among the most unique attractions on Australia’s third largest island. The narrow Backstairs Passage between mainland South Australia and Kangaroo Island is one of the reasons why up to 85 ships submerged beneath the island’s surface since 1847.

Many of those who lost their lives were whalers and sealers. 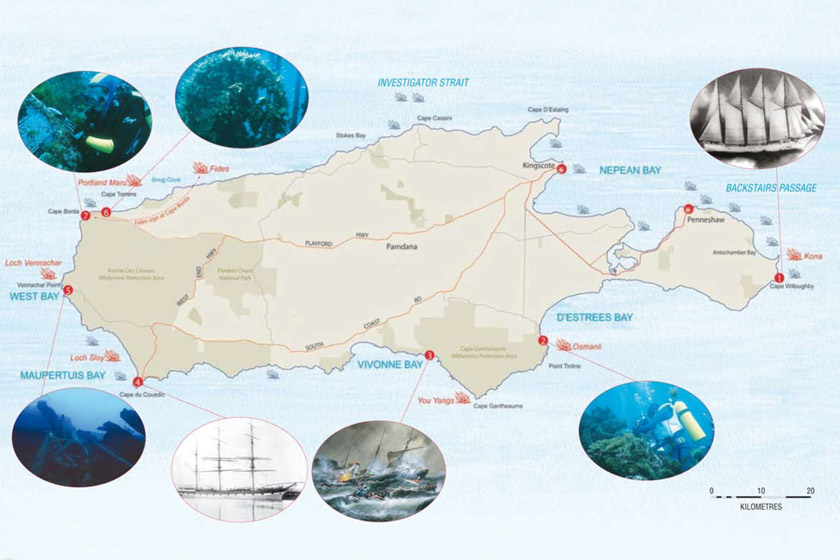 Improved technology aboard vessels and the construction of lighthouses around the island have dramatically decreased the amount of Kangaroo Island shipwrecks during the last century, but several shipwrecks remain undiscovered across the island’s coast.

The largest Kangaroo Island shipwreck was the Portland Maru, which went down off the island’s northwest coast near the Cape Torrens Conservation Park in 1935.

The Loch Sloy, whose 1899 Maurpetius Bay sinking resulted in the drowning of 31 people, is the island’s deadliest known shipwreck.

Shipwrecks of special interest to scuba divers include the Fides, which sank in 1860, and the Loch Vennachar, which remained undiscovered for more than 70 years after its initial 1905 sinking.

Colourful tropical fish and coral reefs surround the remains of the Fides, while the Loch Vennachar’s winch and anchor remain relatively intact.

All of the above shipwrecks are most easily explored along the Kangaroo Island Shipwreck Trail, which circles around the island’s coast.

Penneshaw and Kingscote both contain introductory panels, while seven more story panels are scattered across the coastline.