Emu Bay is just a brief drive west of Kangaroo Island’s largest settlement, Kingscote. The number of holiday homes equals the number of permanent residences in this seaside community on the island’s peaceful north coast. 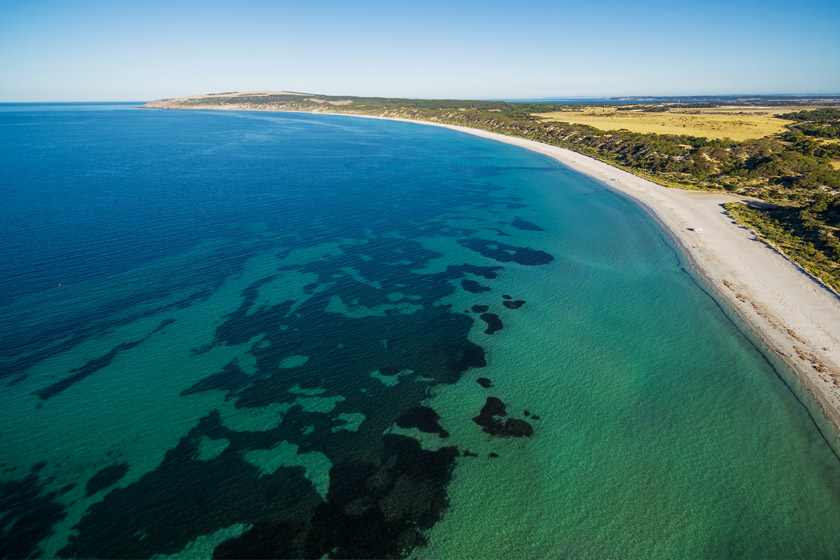 The little town may lack shops and campgrounds, but its beach ranks among the most popular on the island due to its clear waters, long shoreline, and the fact it is one of the few Kangaroo Island beaches with direct vehicle access. Despite the beach’s popularity, however, it rarely gets too crowded even during the hottest summer months.

The unique shale geological formation is another signature landmark, while a small fishing jetty dates back to 1918. Visitors who walk along the long beach in the evening may encounter some of the members of Emu Bay’s fairy penguin colony.

Emu Bay is also not far away from many more uncrowded north coast beaches such as King George Beach, Stokes Bay, and Snellings Beach.

Stokes Bay is best known for its surrounding rock-enclosed pool, while Snellings Beach is a good place for rock-fishing or surf-fishing.

The picturesque communities of Cape Border, Scotts Cove, and Harvey’s Return are located further down the north coast road.

Where to stay at Emu Bay

The bay has a number of self-contained establishments ranging from seaside holiday homes to bushland cottages – a perfect spot to explore Kangaroo Island.

The town is centrally located on the north of the island. Discover more great places to stay on Kangaroo Island and where to stay in Adelaide.