Admirals Arch is one of Kangaroo Island’s most impressive and unusual natural landmarks. It took thousands of years of erosion to create this distinctive rock bridge near the Cape du Couedic Lighthouse on the island’s southwest coast.

The boardwalk leading to the arch is nearly as scenic as the landmark itself. 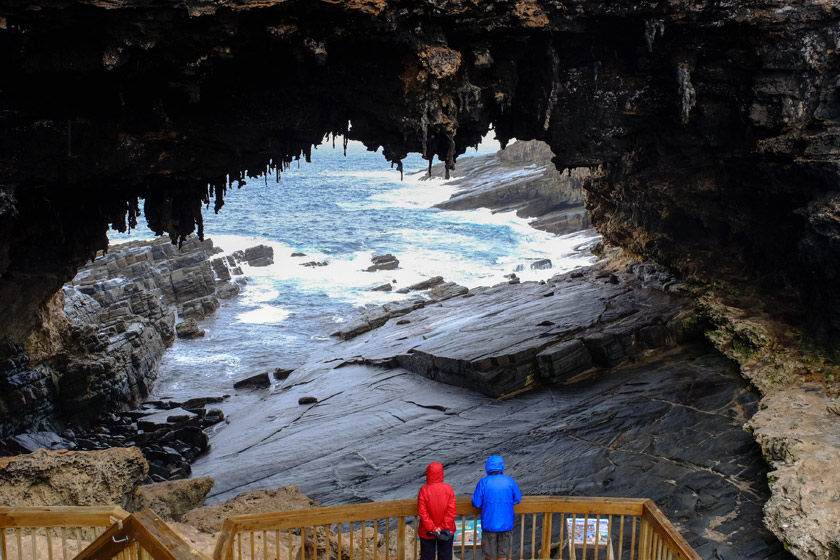 The Admirals Arch viewing platform is also an ideal place to observe the New Zealand fur seal colony that has established itself below the landmark. These dark brown seals rest and breed on land, but find food in the water.

Summer is the primary breeding season, and the rock pools underneath  the arch are a popular place for seal pups to play.

Another unique thing about the arch is the stalactites which dangle from the rocky ceiling of this former cave.

The floor, on the other hand, is very smooth. Whale migration season takes place between May and October, but dolphins are frequently spotted throughout the year.

Another famous Kangaroo Island natural landmark, the Remarkable Rocks, is also nearby.

This landmark is also the starting point of several hikes throughout Flinders Chase National Park.

The Admirals Arch Boardwalk leads to the Cape du Couedic Lightstation, which has guarded the southwest coast of the island since 1909.